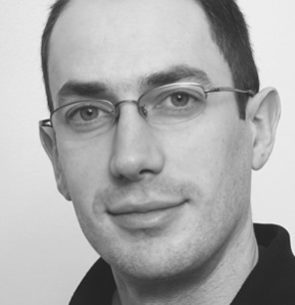 Peter J. Bentley Ph.D. B.Sc. (Hons) is an Honorary Professor and Teaching Fellow at the Department of Computer Science, University College London (UCL), Collaborating Professor at the Korean Advanced Institute for Science and Technology (KAIST), Chief Technology Officer at AI company Braintree Ltd, co-founder of Kazoova Ltd, a consultant and a freelance writer. Previously he was also a Visting Fellow at SIMTech, A*STAR, Singapore, Visiting Research Fellow at Goldsmiths College, London, Visiting Research Fellow at the University of Kent, Canterbury, and a contributing editor for WIRED UK. He achieved a B.Sc. (Hon’s) degree in Computer Science (Artificial Intelligence) in 1993 and a Ph.D. in evolutionary computation applied to design in 1996, at the age of 24. Peter runs the Digital Biology Interest Group at UCL. His research investigates evolutionary algorithms, computational development, artificial immune systems, swarming systems and other complex systems, applied to diverse applications including design, control, novel robotics, nanotechnology, fraud detection, mobile wireless devices, security, art and music composition. He is also author of the number one bestselling iPhone app iStethoscope Pro. Peter was nominated for the $100,000 Edge of Computation Prize in 2005, and was a finalist for the AAAS 2010 Science Books & Films Prize. Through his research and his books he often gives public lectures, takes part in debates, and appears on radio and television; he was the host of the monthly Royal Institution’s Cafe Scientifique, and a Science Media Expert for the RI Science Media Centre. He is a regular science and technology writer for BBC Focus magazine. He regularly gives plenary speeches at international scientific conferences and is a consultant, convenor, chair and reviewer for workshops, conferences, journals and books in the field of evolutionary computation and complex systems. He has published over 250 scientific papers and is editor of the books “Evolutionary Design by Computers”,”Creative Evolutionary Systems” and “On Growth, Form and Computers”, and author of “The PhD Application Handbook” and the popular science books “Digital Biology”, “The Book of Numbers”, “The Undercover Scientist” and “Digitized.”